Interesting Case of the Week 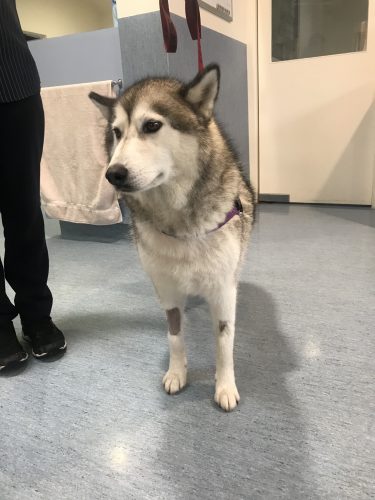 Nian Gao a 2 year old Husky came in to see Dr. Jane as he was limping on his right front leg. His owners were unaware of any injuries that could have caused the limp. Nevertheless, Nian Gao was known to be a very active dog. On examination, Dr. Jane found that while he was lame on the walk, he could weight bear on the affected leg during sitting or standing. He was also extremely sore when she handled his right elbow and a part way down his leg. Understandably, his pain made the examination very challenging and an x-ray would be needed to confirm what was going on.

Nian Gao’s owners decided to see if rest and some anti inflammatories would help. Unfortunately, he did not improve and he was brought back for x-rays the next day.

On a second examination, Dr. Robbie found a thin hard bump in the middle of his leg at the painful area that Dr. Jane identified the day before. He thought that a fracture was unlikely as Nian Gao was still weight bearing on that leg. Nevertheless, we sedated the 35kg Husky and proceeded to take the x-rays. Interestingly, no evidence of bone fractures were found. The hard bump that we could still feel did not show up at all on the x-rays.

We decided to try to see if sampling the bump with a needle would yield more information. When we clipped the fur from around the bump, Dr. Ashley found a small wound just where the bump ended. She attempted to use long thin forceps to reach into the wound and see if a foreign object could be grasped and removed. Unfortunately, she was unsuccessful and elected to surgically explore the area to identify and remove the object. The skin was cut but no foreign object was visible.  Nevertheless, the bump could still be felt underneath the muscle and she made her incision longer. At the corner of the incision, she saw a black pointy object sticking out of Nian’s muscle and carefully retrieved the object. A long 3cm sharp black object was remove from under Nian’s muscle! Problem fixed. All that was left to do was to flush the wound with sterile saline and stitch him up. 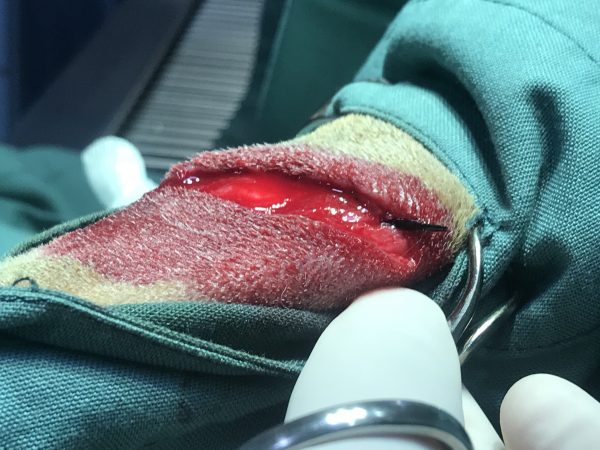 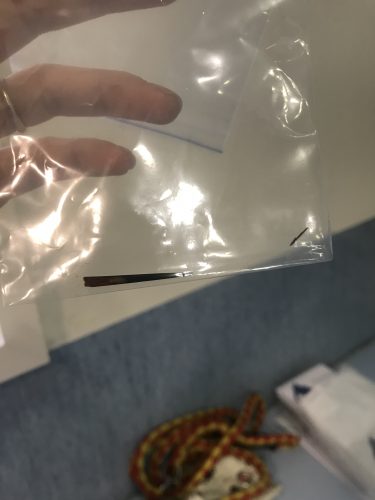 Nian Gao recovered from anaesthesia uneventfully and was more than happy to go home. After seeing the foreign object, his owner thought that it could have come from a plant at home. Dr. Ashley thought that considering it was very smooth that it might have come from the tooth of a comb. Irregardless, how the dog managed to embed the pointy article into his muscle would continue to remain a mystery.

The Husky was sent home with antibiotics, instructions to continue his pain relief tablets and an elizabethan collar to prevent him from pulling his stitches out. The latest update we had was that Nian Gao had self-removed some of his stitches (he seems to have worked out how to remove his ecollar) but his wound seems to be healing well.