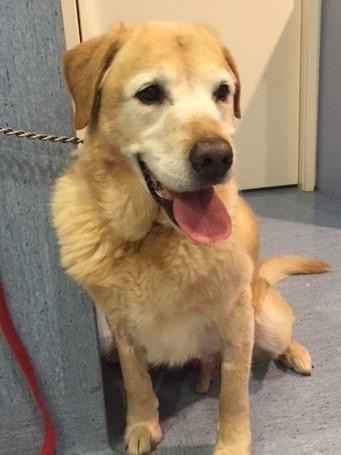 IF YOU ARE SENSITIVE OF,  OR WORRIED BY IMAGES OF SURGERY OR SMALL AMOUNTS OF BLOOD, PLEASE DO NOT READ FURTHER.

Recently we were presented with Goldy, a 12YO Golden Retriever who had been unwell and not wanting to eat for the previous day or so, and had been vomiting.

Goldy is usually, despite his age, full of beans.

He was very sad, droopy eyed, barely wagging his tail. I told his owner “This is not Goldy”.

He was dehydrated, and quite painful in his tummy.

I could feel a big spleen, but also what felt like thick and painful intestines.

X-rays showed Goldy had severe bunching of his intestines, with some gas. 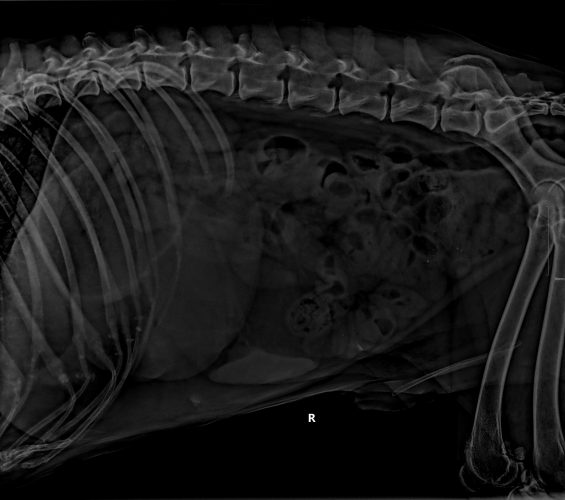 As I was worried about a possible foreign body causing a blockage, I recommended Goldy have an exploratory laparotomy surgery (ie go in and have a look) to see if we could remove what was stuck.

At surgery I found that his entire small intestines were all bunched up!

I could feel a mass in Goldy’s stomach, that extended all the way into the small intestine. 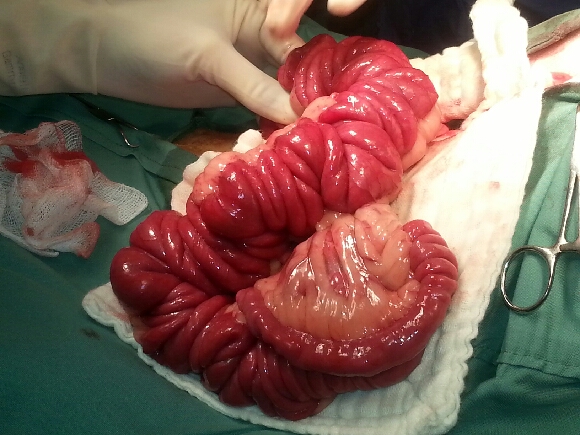 After making 3 different incisions into his stomach and intestines, I was able to remove a big long plastic shopping bag! 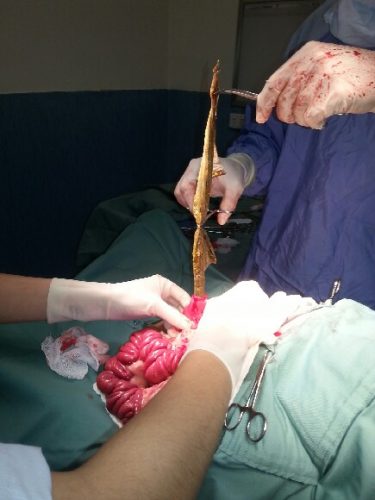 We call these types of obstructions LINEAR FOREIGN BODIES. These are commonly long bits of string or rope, that become anchored and can’t pass through.

With all the bunching, nothing else can pass through, leading to obstruction.

With time, the intestines become so bunched up that they can start to become damaged because the blood supply is compromised, with the material sometimes cutting through the intestinal wall.

Animals that have a linear foreign body will present not wanting to eat, vomiting, and have abdominal/tummy pain.

So Goldy was really lucky. The plastic bag was getting close to cutting off blood supply in his intestines. Once the bag was removed, he slowly started to get some colour back into the wall of his intestine.

He stayed in the hospital for the night, and the next day was eating a little bit of chicken. We send him home and at his check the next day, he was getting some of his beans back!

I took his skin staples out after 10 days, and he was back to good old Goldy again, who despite his 12 years, and despite his arthritis, was bouncing around the room!

So make sure you always keep an eye out for possible things your dog (or cat) could eat. We still don’t know where Goldy got his plastic bag – he may have even found it on a walk!

It was the first time I’ve had to remove a Plastic Bag as a Foreign Body from a dog. But not the weirdest!

When I was working in England, I saw a dog who had eaten all the magnetic tape from inside a Cassette Tape!

But that’s a story for another day…